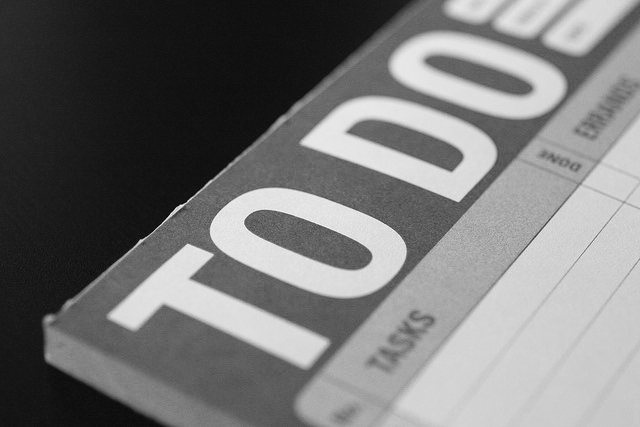 I used to keep a list, it had on it, all those things, I had to do. It definitely wasn’t the minimalist to do list I have today. There were things to do around the house, things I had to do for work. Things we  need to do as a family. It grew, there were pieces of paper with scribbled notes, papers from meetings, my Filofax, and those were the lists that were on paper. It spread to my computer, where there were yet more lists, documents, notes, electronic stickies and a multitude of software apps that promised to manage these things for me, make me more organised, and efficient.

I had a change of heart about lists, where once they helped me remember, schedule, and organise, they became quite the opposite. They made me suffer, directed my days and were prescriptive. I dreaded my lists, the sheer number of items on them. Every time I saw them my heart sank. Weekends turned into ‘list-fests’ where I’d try frantically to remove things, only to then find there were more things on there at the end of the week that there were at the beginning. I felt controlled by what was on the list, and became eternally frustrated that I hadn’t completed everything there. How could I fail to achieve such a seemingly simple thing. I’d put the tasks there, but I couldn’t achieve my own goals.

So one day I called an end to this battle. I deleted everything on my to-do list.

So now what?  What about the endorphin rush of crossing items off the list, of having achieved something, the feeling was almost addictive. I could be efficient, and productive, and people would admire my organisational skills.

Actually, it doesn’t matter. Catastrophes don’t happen, maybe at worst you forget the odd relatively unimportant thing. Its no problem, for the most part things that need doing will still be there. Its just you won’t get stressed about them, and they won’t be permanently reminding you’ve ignored them by appearing on lists, or pop-up reminders. We rarely forget things that are most important, because by their nature, they’re important. I still keep a minimalist to do list, but these are goals, and dreams and desires, just the really nice things I’d like to achieve in the coming year. I know them off by heart, because they are so important to me, so its not a physical list and doesn’t need pop-up reminders.

So what were all this tasks ? – Turns out they weren’t that important, some had been on the list for years. Some I’d procrastinated about, I didn’t actually want to do, in fact I was never likely to do either. Some were things I felt I ought to be doing. Some of which were tasks other people should be doing. When I went through them all, some were so obvious and mundane they didn’t really need to be there. Some I could do nothing about for months, they were just reminders of upcoming events. All in all, hardly any of them were really important.

So take a look at your own To-Do list, especially if you find it overwhelming, take a look at each task and ask your self, what’s the next action, is it truly important to me ? If its really that bad, delete it, throw it away, or if you really can’t bear to do that. Put it somewhere where you can’t see it for at least a week. A week later, are those tasks really that important ?